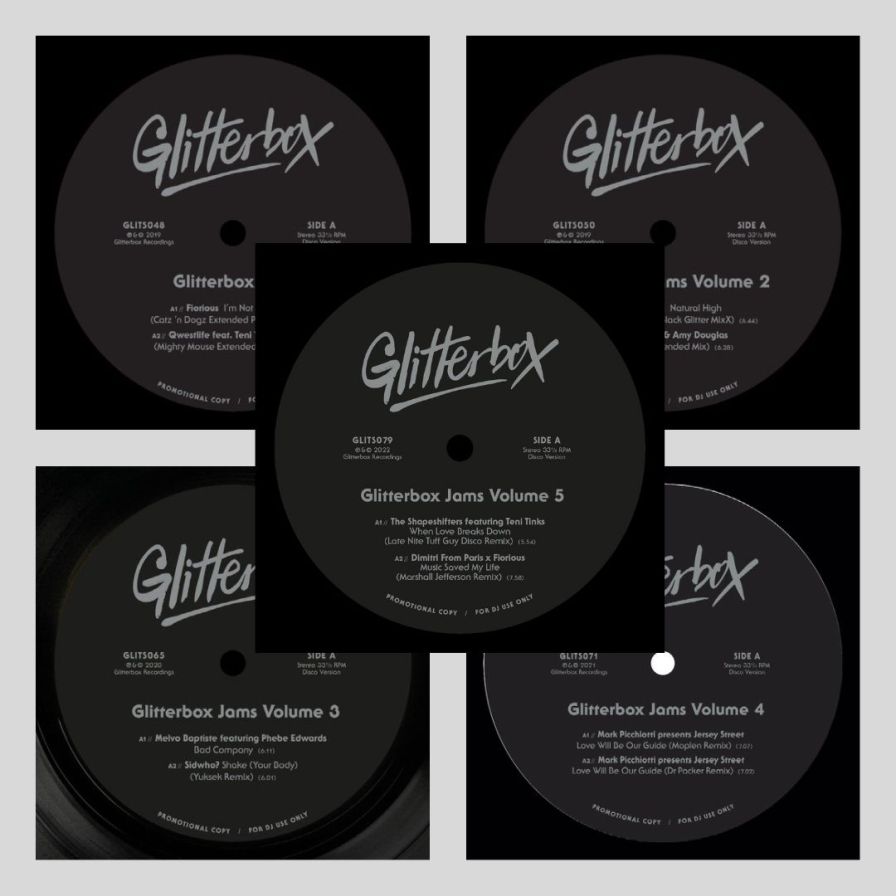 Exclusively now back in stock, grab yourself a copy of the ever-popular Glitterbox Jams Volume 1, 2, 3 and 4. Four red-hot 12" packages of dancefloor gems at a discounted price!

After a year that will go down in the Glitterbox history books, five previously unreleased mixes that have soundtracked the label’s parties in 2019 are given a special vinyl outing, on part one of new series Glitterbox Jams. This red-hot 12” delivery opens with the sought-after Catz ‘n Dogz remix of Fiorious’ ‘I’m Not Defeated’, where the Polish duo re-work this powerful call-to-resistance anthem into a synth-laden club cut. Up next, Mighty Mouse delivers his gloriously funky remix of Qwestlife’s ‘Hit It Off’, where the powerhouse vocals of Teni Tinks really shine. On the flip disco maestro Mousse T. delivers his magnificent mash-up of Selace’s ‘So Hooked On Your Lovin’’ and ‘Bad Habit’, appropriately titled ‘Hooked On Bad Habits’. Finally, Joey Negro’s Falling Into Dub Again mix of Horse Meat Disco & Kathy Sledge’s sublime summer-time hit ‘Falling Deep In Love’ comes through the speaker, a perfect tool for any disco-discerning DJ. This is another delivery from the Glitterbox camp you won’t want to miss.

Returning for Volume 2 of the sought-after series, Glitterbox Jams is back with another red-hot delivery of dancefloor gems, ready to become a record box essential for all discerning disco DJs. Delivering two tracks previously unavailable on vinyl and a pair of previews from the imprint, Volume 2 opens with Mike Dunn’s irresistible ‘Natural High’. Featuring Mike’s unmistakable Windy City drawl, this stripped-back disco-house jam sees Mike flex his musical muscles with traditional analogue techniques. Up next, a silky-smooth disco number and exclusive first listen of enigmatic duo Body Music’s latest output, where pair team up with the ferocious voice of Amy Douglas. On the flip, another forthcoming Glitterbox release powers through, as French production maestro Yuksek turns his hand at remixing Risk Assessment’s ‘Remember Me’, featuring the mystical vocals of Jemeni G. Recounting tales of Studio 54, self-expression and long nights spent on the dancefloor, this exhilarating cut makes a perfect fit for Glitterbox’s ethos of acceptance and open mindedness. Finally, the unmistakable bounding bassline of Seamus Haji’s ‘Boogie 2nite’ delivers a dose of Saturday night fever, rounding off this sublime release from the Glitterbox camp.

Returning for Volume 3 of the sought-after series, Glitterbox Jams is back with another red-hot delivery of dancefloor gems, ready to become a record box essential for all discerning disco DJs. Delivering a selection of the imprint’s finest cuts, most of which have not been available previously on vinyl, the release opens with Glitterbox resident Melvo Baptiste’s debut on the label ‘Bad Company’. Featuring London vocalist Phebe Edwards, Melvo draws inspiration from golden-era disco with funk-fuelled guitar riffs, an irresistible bassline and percussive interludes. The Glitterbox debut from enigmatic Australian producer Sidwho? follows, a retro disco jam with a slick, modern twist. On the flip, pioneering Belgian producer Aeroplane’s remix of ‘Jump Into The Light’ by Horse Meat Disco & Kathy Sledge opens the AA Side, displaying his signature nu-disco sound at its finest, with a bumpy, grooving bassline and playful synths giving the Glitterbox anthem a clubbier feel. Finally, a brand new 12” mix of Sticks & Stonez and Liv East’s ‘You’re My’ closes out the package, a blissed-out record that transports you to hazy summer days.

Returning for Volume 4 of the sought-after series, Glitterbox Jams is back with another red-hot delivery of dancefloor gems, ready to become a record box essential for all discerning disco DJs. The A-Side features two remixes of an early noughties dancefloor gem, as two esteemed disco editors Moplen and Dr Packer both take on ‘Love Will Be Our Guide’ from Mark Picchiotti presents Jersey Street. On the flip come two productions from Italian-Belgian producer Vito de Luca, donning his Aeroplane alias for a disco-infused remix of Marco Faraone & Greeko’s hip-house pumper ‘Armaghetton’, before swapping over to his Flush pseudonym to deliver the playful Balearic joy of ‘Come Back Baby’.

Returning for Volume 5 of the sought-after series, Glitterbox Jams is back with another red-hot delivery of dancefloor gems, ready to become an essential package for all discerning selectors. Consisting of four glorious disco remixes, the release kicks off with Late Nite Tuff Guy and his remix of a Glitterbox anthem ‘When Love Breaks Down’ by The Shapeshifters and his regular vocal collaborator Teni Tinks. Up next, Dr Packer reveals the first of two remixes, taking on D.C. LaRue’s 1976 classic ‘Cathedrals’. Marshall Jefferson’s club-ready version of Dimitri From Paris x Fiorious ‘Music Saved My Life’ comes next, before Dr Packer closes out with another D.C. LaRue remix, taking on another slice 70s heat on ‘Hot Jungle Drums And Voo Doo Rhythm’.