As we prepare to head to The Garden for the fifth edition of Defected Croatia, we've taken a moment to highlight some of the artists heading to Tisno for their festival debuts next August.

While each year the festival celebrates our amazing residents and returning favourites, the 6-day duration of the festival allows us to showcase talent from beyond the immediate Defected family, from rising stars of the scene to certified dance legends.

Here are a few of the artists making their Defected Croatia debut in 2020 that you won't want to miss...

Enigma. This is the description most often applied to Kenny Dixon Jnr, more often known as Moodymann. But you only need to scratch the surface of his wide-ranging, groundbreaking catalogue of the past 25 years to get a strong sense of what makes this unique artist tick. Dixon has said he makes music for those who listen – and on doing so, the so-called enigma is soon stripped away, and we discover an artist like no other sharing his world with us. Notoriously unpredictable and sometimes bordering on performance art, no two Moodymann DJ sets are the same, and we can't wai to see what he has in store for his Croatia debut.

A Manhattan pioneer with a career spanning over five decades, Danny Krivit continues to be one of the most influential forces in dance music. His prolific production and remixing capabilities have touched hundreds of records – with his signature flare shaping the New York City sound. A music obsessive with a rumoured 50,000 record strong collection, his expertly crafted DJ sets are a masterclass in selection, whether he is playing to a packed stage at Dekmental or at his legendary 718 sessions parties in New York.

After making a lasting impression on the Defected team in Ibiza last summer, where the London duo consistently delivered week after week at Eden, Gorgon City were destined to join us once more in Tisno in 2020. Known for their slamming, party-starting sets, there is no doubt these two will be welcomed with open arms.

An artist who has been on the Croatia wishlist for some time now, Jayda G has built an impressive reputation as a selector, radiating good vibes and positive energy from behind the decks when she plays. The Canadian born artist released her stunning album Significant Changes earlier this year on Ninja Tune and has continuously toured across the globe, enchanting dancefloors wherever she goes.

Also joining this year’s headliners is British DJ Artwork, known for his party-starting sets that are a charismatic mix of disco, house and acid pumpers. Dubbed by Resident Advisor as “casually shaping dance music history,” his ability to seamlessly traverse between genres is what makes him one of the scene’s most-loved DJs. We look forward to seeing what mischief he’ll get up to in Tisno.

Dubbed the 45 Queen, Natasha has been creating waves with her diverse musical stylings for some time now. A devoted record collector and selector, her breadth and depth of musical knowledge has seen her play at some of the world’s hottest parties. Delivering her signature NYC sounds to Tisno in August, this is a debut you won’t want to miss.

After releasing two records on Defected in 2019, first his slamming collab with Jamie Jones ‘Rushing’, then his solo debut on the label ‘Come On Come On’, Darius will now join us in Croatia for the first time in 2020. A kingpin for house music in the north and an Ibiza legend in his own right, Darius’ impressive catalogue of records and reputation for curating DJ sets that keep the party going all-night-long make him the perfect fit for the festival.

If Radio 1 legend Pete Tong dubs an artist a future star, chances are they will be. Steadily rising through the ranks, Yorkshireman Franky Wah has already started his own label Shén Records, extensively toured the UK and Europe, and collaborated with none other than Jessie Ware. With his release ‘Hide’ making the Radio 1 playlist, there is no doubt Franky has the capabilities to produce crossover club heat, and is working away in the studio doing just that.

Continuing to successfully navigate the top rungs of dance music, the success story of Catz ‘N Dogz is still being written. Their own imprint Pets Recordings consistently releases from some of the hottest names, while their own productions continue to infiltrate dancefloors, much like their latest DFTD and Glitterbox releases. With their remix of ‘I’m Not Defeated’ by Fiorious soundtracking Defected Croatia’s 2019 aftermovie its no doubt their debut will be a highlight of the festival.

As the rain poured down on the closing night of Defected Croatia 2019, for anyone who was there it became a truly unforgettable moment. One of the closing tracks of the six-night extravaganza selected by Simon Dunmore was ‘I Want You In My Soul’, a record that has been one of the pivotal releases of the decade. Now Lovebirds, the producer of said record, will make his long-awaited Croatia debut, expect more magical moments from this exceptional artist.

One of Germany’s most prominent musical exports, it’s almost hard to believe 2020 will mark Mousse’s debut at Defected Croatia, given his long-standing relationship with the label. Having recently toured with Glitterbox across Australasia, and releasing big remixes of The Vision, Camelphat and Oliver Dollar to name a few, expect a masterclass in DJing from one if the greats with this exciting festival debut.

Described by Mixmag as “an artist whose creative output screams “disco will never die,” France’s Breakbot will also make his debut at The Garden in August. For those not familiar with Breakbot’s sound, expect starry-eyed, sublime and sometimes unexpected selection from this disco connoisseur.

DJ / producer Jullian Gomes has been breaking waves on the South African house scene for some time now, working with influential artists like Black Coffee as well as Atjazz over in the UK. His innate ability to produce meaninful club tracks and curate impressive DJ sets have garnered him a number of high-profile fans.Taking influence from soul, Latin and classic house in his sets, this a debut not to be missed.

Phase two tickets of Defected Croatia are selling fast, get yours now at defected.com/croatia 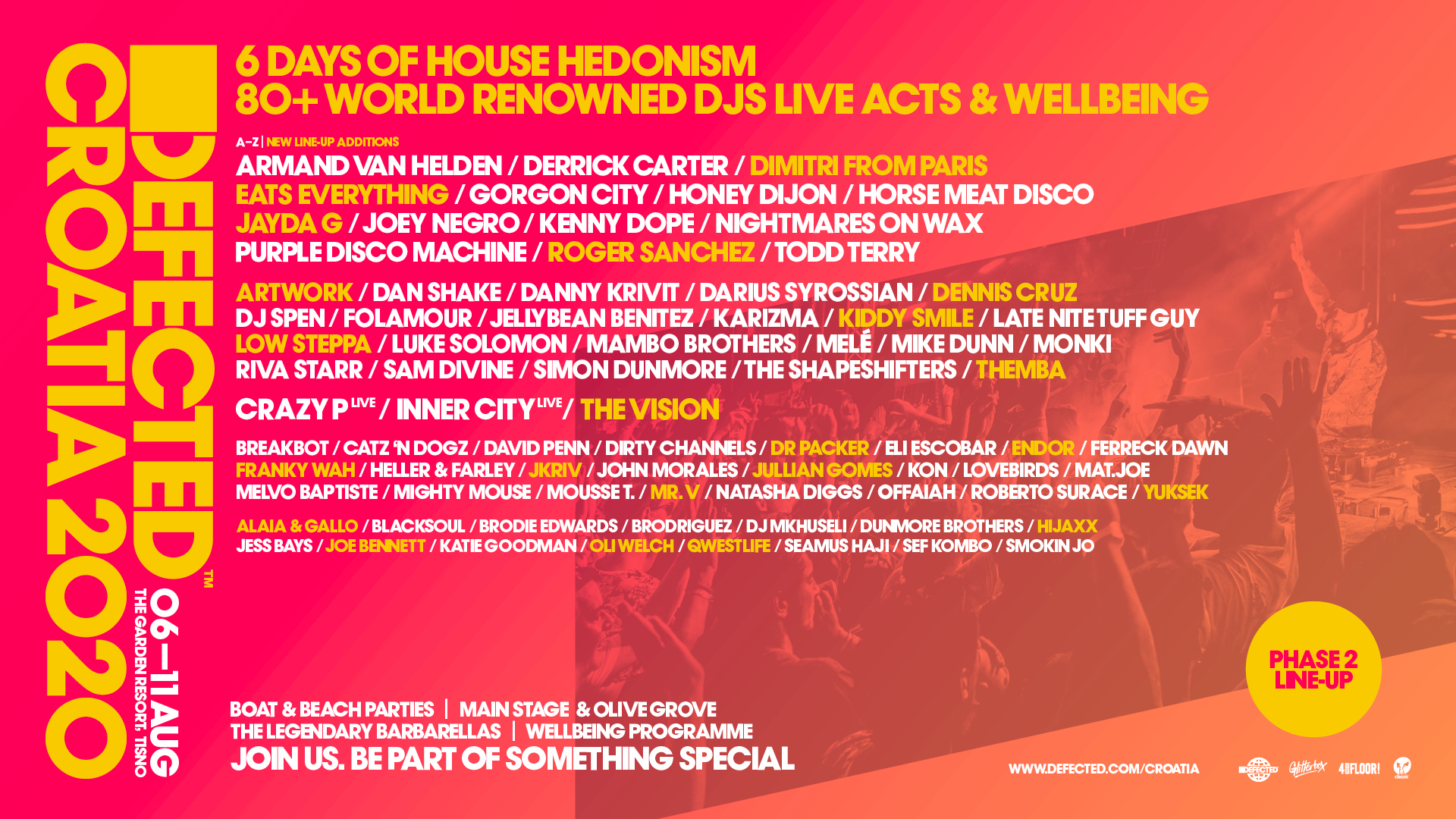