House is a feeling, and as that moment edges ever nearer when that feeling can be shared on a dancefloor, selectors will have a veritable record box full of riches to draw on. This month it’s a global thing, as producers from all over Planet House do their bit to soundtrack what will undoubtedly be some of the most euphoric parties ever staged.

Honey really can do no wrong at this moment and musically this hits every House spot going. Soulful and sassy vocals from London’s Annette Bowman & Detroit’s Nikki-O ride the hooky rhythms  perfectly. A record you just want to hear on your first big night out - BUT then up steps Louie Vega, who turns out a ‘Raw Dub‘ remix that screams early 90s Sound Factory / Sound Factory bar. It’s that MAW dub style that made every DJ shell out for the expensive US double pack, maybe even having to buy 2 copies for those long main room Ministry moments. An underground House anthem for those who understand the real meaning. Available to stream, download and on 12" vinyl HERE.

Matt Edwards’ latest on his new Bandcamp only label is a brooding slice of soundsystem house that tips its hat to Basic Channel while raising a glass to the likes of the late, great Angel Moraes. Coming in at just over 20 minutes long, it’s an imposing cut but, as usual with Edwards’ stretched arrangements, not a minute is wasted and the snaking, hypnotic groove is never anything but gripping.

Jimpster has been keeping very busy in lockdown. Plenty of live streams and more ace new productions. Here he plays away from his own labels but it's his trademark sound as he takes Philly hero Rich Medina's dulcet spoken words into another deeply soulful yet slightly left of centre track  that's perfect for those impending dancefloors. A match made in house heaven that is every bit as good as you think it will be.

As one of Detroit’s most highly regarded mastering engineers, Brian Kage has been sitting in the hot seat working with the greats for time. He started the label Michigander Music and has put out records on Omar S’s FXHE, Carl Craig’s Planet-E and Steve Bug’s PokerFlat. This EP sees Kage collab with iconic French producer Taho (FCom, Ovum, Delsin and KMS), so the quality of this EP is a given. Spanning the full spectrum of Motor City house and techno, leading the charge is ‘D-Twah’. It’s an out of this galaxy affair with mood-rushing chord progressions and a spattering of disco bling. ‘Tour De Troit’ weaves robotic impulses with 808s, deep pads and acid bass. Soulful synth waves cut through the smoke machine, with driving bass and techno stabs that build throughout ‘La Belle Vie’. With a suggestion of Inner City in the translation of the title and in the beats, chord progressions lift you up into the cosmos. The closing cut takes the listener by surprise with an orchestral symphony in the shape of ‘Acid Renaissance’. It’s a powerful conclusion to this rock-solid and authentic EP.

Karakul is sub label of London record emporium Phonica, and this month they bring French House player Lea Lisa into the spotlight with her ‘Keys of Life’ EP. Lea has been a key figure on the French and Swiss house scenes since the early 90s. This leading lady of house has had outings on Wolf Music, Mona Musique, Memories and Chez Damier & Jorge Caiado’s Inner Balance Recordings. With Kerri Chandler in her corner, the Kaoz Theory don remixed her last EP, and invited her to guest on his recent Beatport residency. Lea Lisa’s got sass and on ‘Keys of Life’, she showcases her unquestionable production talent. The EP opener is bumping but soulful, lifting the dancer up and away with its classic house feel and good vibrations. Chicago luminary and living house legend Glenn Underground takes the title cut up into space, with pads that swirl above a squelching acid bass line. The ‘Esoteric Dub’ allows even more space, reshaping the sonics into newer shapes and forms closing out this super serious and solid three tracker.

A real Italian ‘Generations of House‘ story here with the legendary Cirillo ( DC10 / Circo Loco original resident ) and young newcomer Bartolomeo. The result is a fresh yet retro sounding delightful slice of european techno with cool Detroit stylings, the futuristic pads keep the pace up with a really cool percussive groove. Timo Maas provides the remix and takes us to a place in time that’s DC10 circa 2005 and just as the last rays of the sun have gone down, the vibe changes into a darker, wonkier one. Trittico we think will be a rather fruitful pairing this summer.

Jordan GCZ’s jazz-infused output is never dull. Whether solo, one half of JuJu & Jordash or a third of Magic Mountain High with Move D, his psychedelic and intensely musical work leaps out of speakers, and this EP for Rush Hour is no different. Head straight for the mind-bending euphoria of ‘Jaguar Dreamin’ if you must narrow this down, but the whole EP is class.

Another great Italian record, this time from Rome’s GrooveBom records. Luis Radio was one of Italy’s original House DJs at Rome’s ‘Frankie Go’ club back in ’89, and the famous ‘Echoes’ in Rimini in the early 90s, so you know he knows about what’s needed in a track. Together with his partner Stefano Guerra, they’ve been making waves for quite a while and this percussive organ led Afro tinged instrumental should grab more attention - reminds me of those Scott Grooves tracks that were so big at Faith parties back in the day, which in itself is a very good thing .

Chicago’s Mike T and Kenny Gino aka Solid Gold Playaz, have been deep in the underground but high on the radar of those in the know since the late 90s. Their productions have been signed to respected techno and house labels like Berlin's Kanzleramt, Paris' Silver Network, Chicago's Loft66, Detroit's Moods, as well as having had countless releases on their own Solid Gold Records imprint. Their music goes deep. It is passionate, heavyweight house with serious dancefloor intention. They are hosted this month on London’s Freerange Records, welcomed by Jimpster as he openly admits to being a huge fan. Opener ‘My Mind Is In A Daze’, takes you to a small dark club where you are enveloped in sound in the middle of the floor, drenched in sweat and the vibe of the highest quality house. The powerfully hypnotic beat of the ‘The Kiss’ is filled with complex percussion, while ‘Let Me See You Jack’ delivers dreamy and emotional synths that dance along with the driving beats of the 808 to Mike T’s off kilter vocal. EP closer ‘Optical Illusion’ goes deeper than the Mariana Trench. It is indeed Solid Gold.

Maybe not an artist name you want to be trying to ask a DJ for at 3am but definitely one to watch.  Here ZFEE aka Berlin based drummer/producer Ziggy Zeitgeist adds two more tracks to Secretsundaze's eclectic label. Ziggy welcomes rising star Wayne Snow to deliver the vocals on 'Something Special', a genre blurring piece of modern brit funk meets space disco house.

Flip over for ‘Kreuzberg Kix’, keeping the space vibe, in what sounds like a live jam of quality bass, keys and congas. It’s NYC don GE-OLOGY's mix of ‘Kix’ that will probably get most plays with it's slighty deeper take that will draw the heads to the dancefloor.

Felipe Gordon is a becoming a sure thing, here delivering six cuts from deep house to disco to jazz, all infused with a whole lot of soul. The Bogota native stepping up on fresh new label Fluid Funk, his previous outings on Shall Not Fade, Toy Tonics and Razor-N-Tape having all displayed his production muscle, which he continues to flex here on ‘Sincopa Liquida’. The opening cut is a colourful carnival of keys, grooves, and proper industrial percussion, with jazz trumpets, Rhodes stabs, and a very solid groove. The OG of ‘Samplin’ N’ Slappin’ is one serious cut. It also gets a rework from London’s disco wonder boy Aroop Roy, who turns in a dancefloor weapon full to the brim with atmosphere, enveloping broken house groove and pads that are highly addictive. ‘Obtuso’ takes us to Chicago house days with shuffling rhythm and beefy bass that contrast against the delicate piano chords. NDATL master Kai Alcé steps in on ‘Evolving Textures’, keeping the integrity of the original, adding jazzy flutes and breezy strings, upping the ante to give this EP a full on and physical jacking house 10.

3 underground tracks that take in disco, 90s New York & modern deep house. The infamous South Beach recycling crew joined by our own  Terry Farley who's on lockdown  'executive production' duties lol. This 12" has proved a lockdown winner with a lot of online DJs and heads. There's a fucked up version of 'Grace' that’s an obvious contender for the open air terraces, but it’s the Ballroom conversation about ' Going Big or Going Home' that sets the tone for us.

Doing something entirely new with the tribal house template, this track starts with pounding, drum-fuelled energy and descends into an infectious wonky grind as it unfolds. It’s memorable, groovy, banging and challenging in equal measure - a total breath of fresh air.

Get your hands on exclusive Faith clothing on the D-Store and grab your copy of the Faith Spring Edition here. 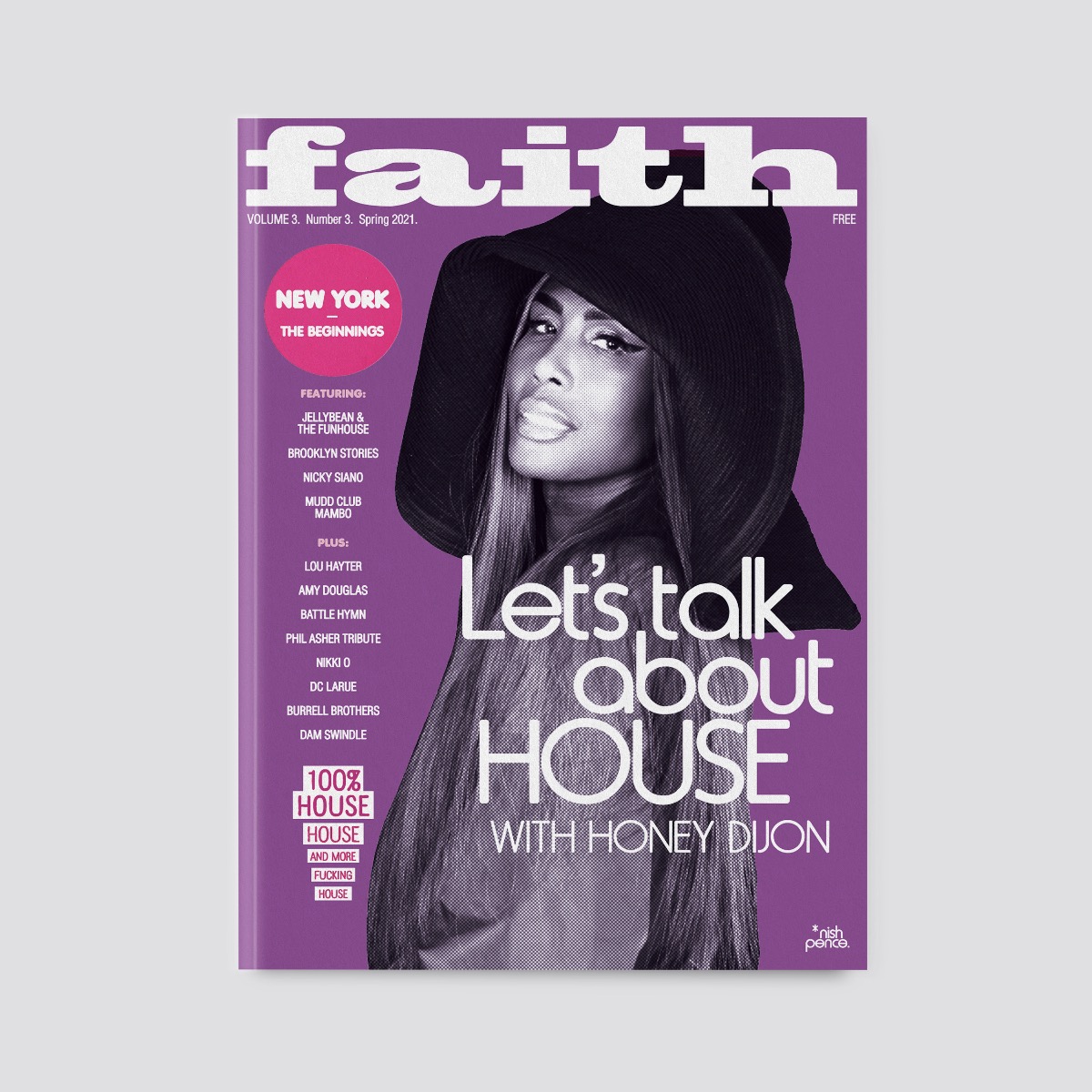