If you will forgive us for channelling our inner Carl Cox for a moment – OH YES OH YES! After a somewhat quiet release schedule last month, September is full to the brim with – you guessed it – 100% house, house and more fucking house. Much as we remain indebted to the stalwarts who kept releasing through lockdown, clearly the slow but steady reopening of clubs worldwide is encouraging our foremost creatives to get busy. Styles aplenty from all corners of the globe, as names old and new serve up a sonic September smorgasboard for all house heads to gorge on.

The undisputed Don of early 90s NY Deepness Rheji Burrell revives his Avant Garde guise (‘Somebody Skat’n’ / ‘C’mon’ ) that came out in ‘91 on Nu Groove and remains a big underground ‘heads‘ track. The vibe is a gorgeous mix of those Nu Groove elements, sparse drums, haunting melodic vocals, stabby NY organs  and a great use of space. Can imagine this appealing to the kids caught up in the London 2 step revival and Jazz DJs  as much as the old school House crews.

Mark Hawkins has been tearing up dancefloors and standing out from the crowd for two decades plus. Now Hawkins brings us ‘The New Normal’, on Fabric’s label Houndstooth. This artist has done his time and earnt his stripes as a field raver, a deadly DJ and top-level producer, putting out monster cuts on Dixon Avenue Basement Jams, Clone, AUS Music and Houndstooth. ‘The New Normal’ pulls together his years of detail, experience, and expert skill to cross over styles and genres. On ‘Let It Slide’ Hawkins collabs with stellar talent Jamie Lidell, delivering a genre defying cut. ‘100% Percent’ has classic house feels plus a tasty, dreamy vocal. But ‘You Bring The Sunshine’ is the standout here. It’s uplifting, feel good house at its very best.

Last month's record of the month was David Morales and Mr V's massive 'Everyday of My Life' and like a good London night bus on a cold wet winter’s night you wait for ages then they all come along together. This is maximum Morales deep percusion, NY 90s organs, a beautiful female vocal (sadly uncredited) and Mr V supplying the deep spoken word vibe. David's style is iconic, its modern yet classic Def Mix harking back to those glorious early - mid 90's when David , Satoshi & Frankie were the kings of US House music, their productions setting the standards worldwide. If he hadn’t been record of the month in August then this would have been this month’s choice but we have to share the love.

An EP dripping in late night basement sweat from Baltimore's (but now Detroit based) Ladymonix.  Title track ‘Steppin' Out’ is one of those tracks you want to hear when you step into a club - deep, laidback but still enough going on with its subtle acid bassline and vocal snippets to tempt you onto the dancefloor. Another super talent Wajeed adds his golden touch to the remix of ‘Steppin' Out’, turning the energy up for a jackin', teched up version that moves this into big room territory.  Definitely not fillers, the deep pads of ‘The Nerve’ lead into more (gentle) acid tweakery, while ‘It's A Party Dammit!’ completes this set in fine, spaced out but floor friendly fashion.

Stunning three tracker of the highest quality, from the German veteran producer who’s been a fave of ours since the mid 90s. All the tracks are high quality production wise, while remaining raw and funky. ‘Basic Juno' has a Wild Pitch feel to the chords and build, and feels so right for some 5am dark room action. ‘Close Your Eyes' is far more up and bouncy in a tech way and the final track ‘303‘ is a fantastic peak time Acid track with a bubbling bass, driving groove and building synths. Highly recommended.

Coming correct with the heavyweight goods, Freerange Records continue to celebrate 25 years in the game delivering this muscular Remixed EP. Jamie Odell invites some of his favourite producers to put their slant on some tracks from the vaults. Oakland’s Space Ghost takes on ‘One ft Casamena’, adding layers of synths and bass to beef up the groove. Mad Mike protégé and Timeline and Galaxy To Galaxy’s talent, Jon Dixon, does his thing on ‘Smile For A While’, changing up this lockdown cut into a fusion of piano and solid Detroit sonics. The Teflon Dons bring a more jacking house flavour to the collection, while Kai Alce makes his Freerange debut taking ‘Inside Loop’ deeper with his trademark soulful vibe. Hot property Kareem Ali beckons on the sunset with his rework of ‘Brought To Bare’. EP closer comes via Solid Gold Playaz, rolling tech flavour to ‘Echoes In My Head’. This is one heavy EP! 10/10 for the Freerange camp.

The iconic ‘La Mezcla' is where Swiss musician Michel first grabbed the attention of Luciano and championed a record that was for many THE record of the year 2008. Many described ‘La Mezcla’ as indescribable and unique. ’Star Odyssey ‘ also has a unique quality in its soaring strings, tribal drums, haunting pianos and keys - and at over 9 mins it’s a great journey. This ain’t a track for the 4 min mix in mix out DJs. ‘Los Ninos' is for the dancers who love to get lost in the music and take the journey. Beautiful, timeless and HOUSE as fuck.

One of the standout tracks from Migs' recent 'Shaping Visions' album which showcased Miguel's versatility as a producer, these remixes are back on familiar house territory.  MM's own Deep Feels mix has that West Coast bounce, full of funk and perfect to get the dancefloor started. Sandy Rivera goes for a less big room vibe than usual with a more heads down, deeper take on his 'Re-Vamped Mix'. Both reworks let the wonderful vocals of Cameroon singer Andy Allo shine through on this soul drenched release, just in time for those late summer outdoor sessions.

‘Sweet Sweet Music’ is a collaboration between UK house music veteran Mark Wilkinson and Brit-Soul legend Kenny Thomas, which was originally released in 2016. With a lovely fresh revamp for 2021 (and for a great cause!), the duo are re-releasing the single to help fund the continued life giving treatment for Kenny’s daughter Christina, who was diagnosed with an inoperable brain tumour at the age of four, yet continues to defy the odds stacked against her. Backed by vocals from Christina’s mother, Kenny’s distinct smooth tones glide over a warm soulful house soundtrack courtesy of Mark Wilkinson, alongside Michele Chiavarini and Toni Economides, who together bring layers of emotive melodies to this heart warming, love filled release. You can donate via the JustGiving page they have set up HERE.

Do Razor-N-Tape ever sleep? More scorching heat from these guys, this time with LA’s 10-piece Latin-funk outfit Jungle Fire, who are back on the Brooklyn heavyweight label with a five-track EP that is hot and spicy as hell. It’s dubby, tropical disco that will take you to tropical heaven, kicking off with Colombian juggernaut Felipe Gordon, who makes a bomb out of the title track. Label head Jkriv lays acid lines over a funky groove on his ‘Elektrikossa Dub’, that is sure to explode on the floor, with turntablist DJ Nu-Mark, moving his version of ‘Atómico’ in a more breakbeat direction. Jungle Fire band member Samuel Bailey’s ‘Biri Biri’ is an exotic adventure that kicks, but it’s Patrick Bailey who delivers the cut of the EP for me with his ‘Snake In Da Bronx’ take on ‘La Kossa’. HOT.

Brian Kage recently dropped his Detroit EP on his own Michigander imprint and made one hell of a mark. He’s been making music, remixing, mixing down and mastering for some of the biggest names and labels in Detroit, so it makes sense that this bloke is in the Detroit know. Kage joins forces with one of the city’s most influential and true innovators of the Techno City sound – Delano Smith. Together they deliver the ‘Keep Em Movin’ EP. The title track goes full on beastmode, setting the record straight about what it really means to represent Detroit. ‘D-Spirit’ has a vintage feel where afro deep house meets spacey techno, celestial pads, and exquisite percussion to make the dancer move. Closing cut ‘For The Music’, is at once familiar, with shades of Smith’s infamous ‘A Message For The DJ’, reshaped into some real-time, bumping Detroit Shit. All power to  Michigander Records. What will they do next?

Faith's summer issue is available to order for free from the D-Store (Excl P&P) here, plus check out exclusive Faith merch. 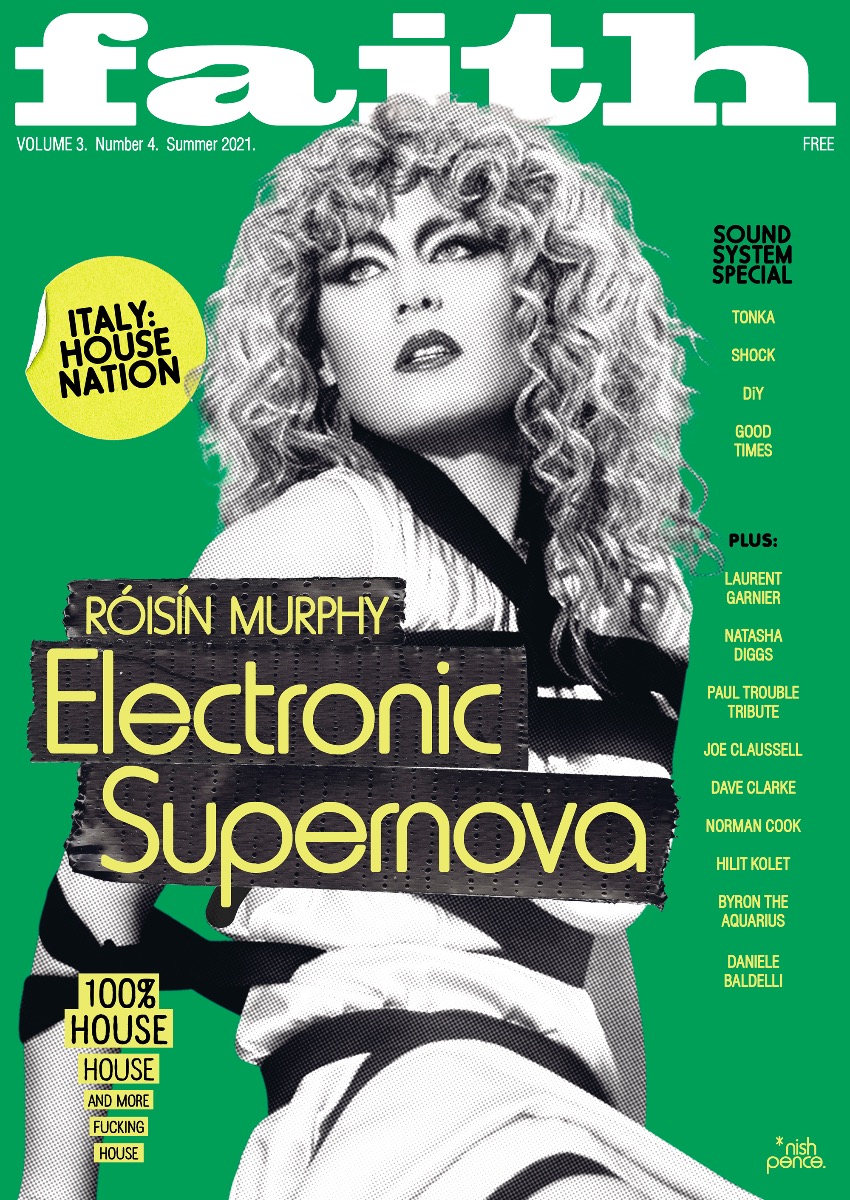