The third in a new series in which Classic co-founder, DJ, producer and all-round musical good guy Luke Solomon speaks to some of the best and least known record shops, both digital and in the real world.

I hear Traxsource is 10 this year… Happy Birthday! Can you give me a little history for the readers?

Thanks Luke, it’s hard to believe it’s actually been 10 years but we are indeed celebrating our 10th year!

Traxsource was born out of our record company, Soulfuric Recordings, which was home to artists like Jazz-N-Groove, John Julius Knight, Soulsearcher, Urban Blues Project, Copyright and Axwell along with many others.  Soulfuric is also owned and operated by myself and Marc Pomeroy whom are co-founders of Traxsource. Soulfuric was quite a popular label at the time (around 2001), and we were DJing a lot everywhere.  We began to notice a trend where young DJs would be playing our new tracks off CD which should have been impossible because there was only a couple vinyl test pressings in existence and no one had a digital copy except the mastering guy.

Then one day someone showed us Audio Galaxy and Napster and we just felt sick.  Seeing our new releases which were scheduled to come out in 3 months’ time or more with thousands of people queued to download the file was a sight to see.  We kind of obsessed for a while to find a solution as we knew in order to survive we needed to find a way to fill this growing digital demand. It's was actually Axwell who said to us, "don't worry, someone smart is gonna figure out how to make money with these mp3s" And this was the birth of the idea. 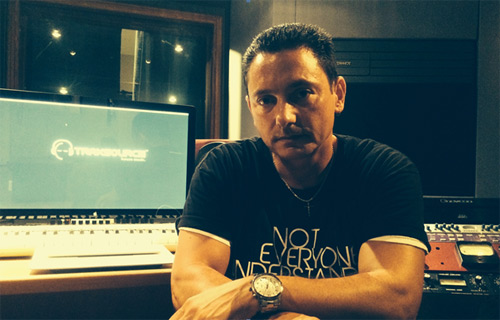 Could you tell me a little bit about your background Brian…

I began DJing in the mid-80s and then was playing around in studios by the early 90s. I had some early releases on labels like Strictly Rhythm, Bassline, Suburban, AM PM etc before Marc Pomeroy and myself hooked up to produce and ultimately start our label Soulfuric Recordings in 1995.

Coming from New Jersey, I was always a big fan of the underground NY, NJ and Philly sound which had a very big influence on me as a DJ and producer.  This became the seed for much of what Marc and I did in those years as Jazz n Groove, Urban Blues Project, Cleptomaniacs and even to this day with Traxsource.

What brought on the decision to move from making music to selling music?

It was a "necessity is the mother of invention" type of thing, in fact originally when we set out to solve the piracy issues we were thinking it would be for our labels and the ones we were distributing only.  The original development process was centred firmly around the Soulfuric labels.

At some point, we thought maybe we should ask some friends if they wanted in and it was Grant Nelson who said “bro don't stop there, get everyone's music!” This was just such an obvious thing to do, but we just weren't thinking about it and to be fair were far more interested in producing and DJing at that time.   But in the end we just thought this was too important not to do. Marc and I both knew if we decided to make a full on store we would be sacrificing our artistic side...and that's exactly what's happened.

Do you miss making music? Are you still active?

I do. Today our days are much different, being in a business like this is very technical and there is just a never-ending stream of new music which needs to be processed, listened to and positioned. In many ways, Marc and I work on Traxsource much in the same way we made records.   Marc was always the musical and technical genius behind the scenes who could bring these amazing sounds and ideas out of the speakers and it's no different today, only today we’re not making records in a studio, we’re making a website.

Right then, into the nitty-gritty. What are your thoughts on digital music versus physical?

Good question. You know I truly love both.  I have been collecting records for 25 years and still have a massive collection which I don't think I could ever part with, but at the same time I really do love all that digital has brought me as a consumer.  I'm a geek really. I love having a massive collection in my pocket and being able to stream it wirelessly in my car, and though out my house. There are things which I love and hate about both.

Do you buy physical music as a consumer?

Not nearly as much these days.  But I do still go crate digging and even CD digging, I'm currently on an 80s kick and finding some gems in second hand shops. 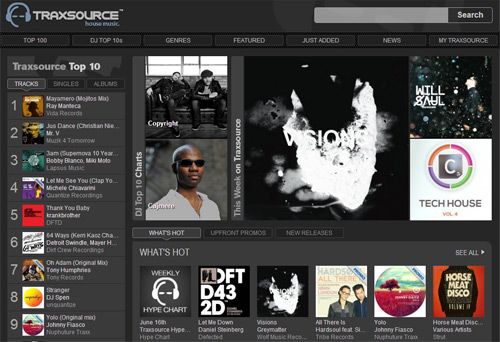 I have interviewed a few physical shops as part of the series. One of the main questions is regarding identity. The consensus is that an identity is an important part of having returning trade and also making you stand out from the crowd. The digital world has even greater competition on this front… is that something that you pride yourself in? Do you think that giving yourself an identity as a place to come and buy certain more specific kinds of music is still applicable?

Absolutely, if you don't stand for something you will end up meaning nothing to anyone.  For us, we have always believed you really have to do something you believe in, because sincerity and heart can be felt. It’s something that translates through the speakers or leaps off the computer screen, this is clearly something people can hear and feel.  So yeah, you need to feel what you do or others simply will not.

The concept behind the compilation I am working on is coupled with the concept of trying to encourage people to search far and wide for music, as sometimes we are governed by charts and statistics in the digital world. I know that both yourselves and stores like Beatport, are driven by charts - and the charts become the record shop assistant as it were. Do you think that the downside of this is that a lot of great music falls under the radar and gets missed?

This is a sad fact and one of the downsides of the digital age. But you know, back in the day a lot of record stores had charts too but it was the people’s mentality which was different. Can you imagine walking into Release The Groove and saying to the guy “I have exactly 5 minutes so please just give me the 10 best records you have this week??” So it's really a sign of the times where culturally we are so spoiled that we expect everything to be just given to us in a perfect way the instant we want it.  But trust, there is a lot of fantastic music out there.  We do more than most to uncover it all and put it in a place people can find it.  We have an extremely passionate staff lead by Sheldon Prince who tirelessly dig in and listen to every track every week. Check out the hype chart and essential charts in each genre, these are purely based on staff choice.

Do you think there is a long term solution to this?

Yes, curation and education: this is the key.  It starts with the DJs, they should be digging more and keeping the labels and stores honest by digging in and finding the gems then playing the hell out of them.

I am interested to know what your long term plans are, and how you see the future for digital music and digital consumerism, especially within dance music.

Wow that's an interesting question, I can tell you one thing I do know for certain, and things will be different tomorrow.  For today, it's simply about doing what we love and to remember that music is a gift...and for us, to be 10 years in doing the exact thing we love, there is just one word: blessed.